Skip to content
I know that house buying stories are as bad as birth stories in the oh-my-god-seriously-why-are-you-telling-us-this stakes, and that a lot of people probably really do not care. If that’s the case, just stop reading now and pop back another day, I won’t be offended, promise. But if you’re buying a house and it’s taking a while, or not going smoothly, or you just fancy making yourself feel better about the process, then, read on. Trust me. It will make you feel better!

As you’ll know if you’ve been reading for a while we’ve just bought a house, but it’s not been a very easy or quick process. We first saw the house we’ve bought last October. Right before Jim left for India. In fact our offer was accepted whilst he was sat on a beach in Goa (he claims that he goes for work. Sitting on a beach in Goa doesn’t sound much like work to me. Does it to you?) I was at work. Working. No alcohol or beach involved.

The lady we bought from was in her 70’s, and we were told she wanted to move in February or March of this year. Awesome we thought. We’ll be moved in by the spring and we’ll have the summer to do it up (and have time to plant some veg). We made some decisions based on this info – for one, we decided not to go snowboarding so we’d have the money to move and not worry. We started planning what to buy. I started pinning excessively. I started dream blog posts. Jim started dream kitchen planning. I started kitchen panicking. Why, oh why, oh why did I say he could design the kitchen? Am I crazy?
And then our seller went to China for a month or so and didn’t find a house. So she pushed the move to the beginning of April. Then the end of April when she still hadn’t found anywhere to move to. It seemed to be constantly moving backwards. I thought we’d never move. Then our seller found out she was sick. Really sick, and so pushed the move date again to the middle of May so she could move to live with her kids. It was sad because she was a lovely lady and she was so ill, but also it still never felt like we’d ever ever move.
And then, on the 24th May, after many chats with our solicitors, we got a phone call to say we’d exchanged. The purchase was under way. Money had been requested from the bank. We were moving in a week. Completing by the end of May. We spent the bank holiday packing. And then, on the Tuesday, we got another call from our solicitor. Our seller had sadly died over the weekend.  The weekend after we exchanged, but before we completed. Even our solicitor didn’t quite know what would happen. Were were still buying the house? Was it appropriate to ask these questions at a time like this? Would her children have any interest in our situation? They’d just lost their mum after all. Would they even still sell to us – in the last 6 months house prices have gone up a lot. So many unanswered questions that made a week seem like a month.

Finally we were told that the ownership of the house was passing to her children who had to sell to us because we’d completed, and that we were locked into buying the house. They had to sell to us, we had to buy. We just didn’t know when. Although, with our mortgage offer running out at the end of June, we hoped it’d be soon.

But because we’d planned to move on the 30th May, and we had all the stuff sorted for it – van and everything, our sellers children let us move in whilst the probate was being sorted, It was being rushed through because of the circumstances, so we’d be fine for completion at the end of June. We just couldn’t make any structural changes.

Mid June we got a call to say Probate had been granted and we were completing on the 27th. Our mortgage offer ran out on the 30th. Awesome. All sorted. Done. So Jim went to Glastonbury and I started planning a pineapple party.

And then at lunchtime on the 27th I got a call from the solicitors. He told me the Halifax wouldn’t send the money as the valuation on the house had run out and we needed to be credit checked again so we couldn’t complete that day. I called Jim at Glastonbury. He was really happy to receive that call! Over the moon. Then I called the mortgage brokers who knew nothing about the valuation running out. Everyone assured us that it’s be sorted on Monday.

Monday rolled round and the Halifax’s computer systems were down and the only way we could get the mortgage the day our offer expired was to produce 3 months of wage slips, which was all well and good for me but Jim was still in a field in Pilton with no phone battery or access to his work emails. We lost the mortgage offer and as the way you apply for a mortgage has changed in the last 6 months we weren’t even sure if we’d get a new one. The Halifax’s answer to us losing the mortgage and potentially the house was to tell us to complain to them! Oh, okay then.

During that week we had a call to say that if we didn’t have a mortgage offered to us by the 15th we’d potentially lose the house, they’d kick us out and keep the deposit. Awesome. Now it’s looking like we’d be homeless and skint. Our solicitors and mortgage brokers called in every favour ever to try and get us a new mortgage. Seriously all of them. A week later we finally completed. But for a week there were tears and threats from my dad to come home from his holiday to help, and more tears and Jim telling me it’d be ok. A lot. More than a lot.

The really crap thing is when I called the Halifax to make the complaint they suggested we make, I was told our valuation hadn’t run out at all and they aren’t sure why we were told that…….so now we’re waiting for a letter from them to explain what happened and why their mistakes meant we had that week and a half of hell.

So, if you’re buying a house and it’s not going smoothly, just feel free to pop back and read this from time to time and thank the stars you’re not stuck in a probate induced limbo……..and hopefully you’re not at the whim of the Halifax either. 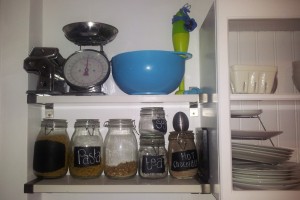 We’re running out of space 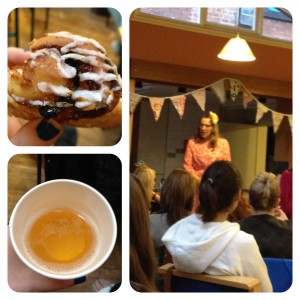 Chic on a shoestring